A wide selection of instruments are available within the BayCenSI Core Facility.

Additional equipment may be booked over the BayCenSI, and is located and run by its associated chairs at 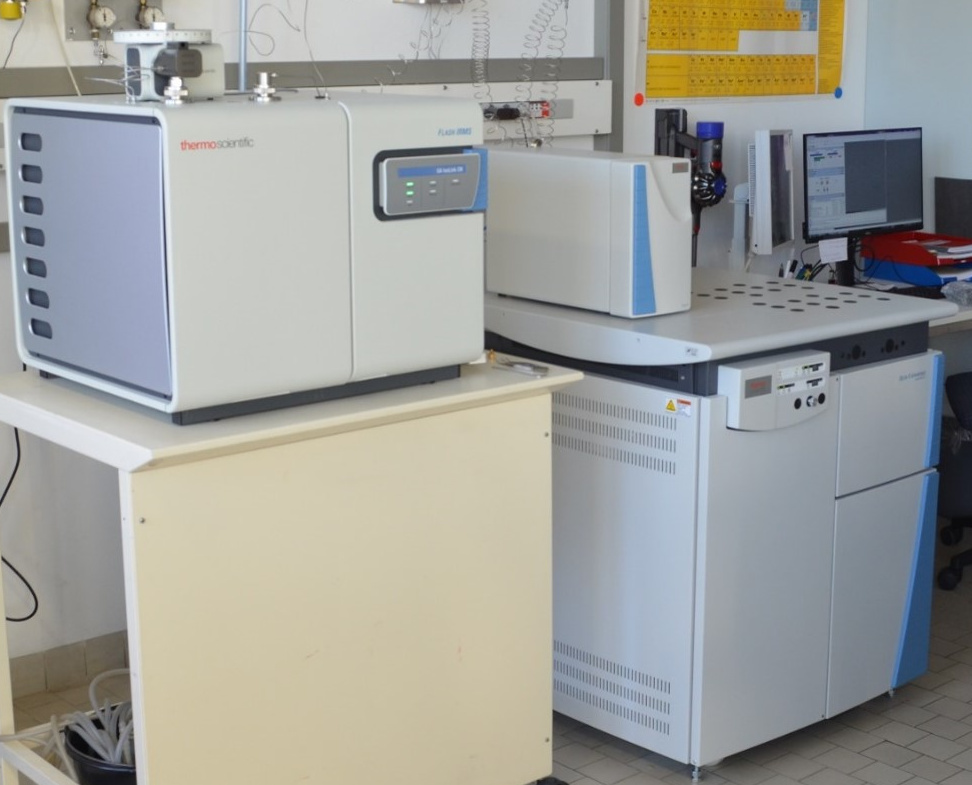 This instrument coupling offers the simultaneous determination of natural isotope abundance and concentration of C, N, (and S; δ13C, δ15N, δ34S) from organic and inorganic solid samples. The homogenized samples are weighed into tin capsules, tightly sealed, and fed into an elemental analyzer via an automatic sampler.

At the oxidation site, the sample is combusted in oxygen (O2) atmosphere and under presence of catalytic oxide components (Cr2O3). Carbon and nitrogen compounds are oxidized to CO2 and N2/NOX, respectively. If S measurements are not of interest, silver-plated cobalt oxide (Co3O4) adsorbs the produced SO2 and halogens. The carrier gas (He) transports the gases to the reduction site, where nitrogen oxides (NOX) and excess O2 are reduced in presence of elemental copper (Cu). Water is scrubbed from the gases by means of a magnesium perchlorate (Mg(ClO4)2) trap. A gas chromatography (GC) column is used to separate the gases to be analyzed (i.e., N2, CO2). If sulfur measurements are done as well, the single reactor used is filled with tungsten oxide (WO3) for oxidation, and copper (Cu) as reducing agent. Also, the GC column must be heated to release the SO2. The sample gas is finally introduced into the IRMS by means of an open split interface, allowing the dilution of the sample gas and the introduction of standard gases with known isotope abundance to determine the relative abundance ratios of 13C/12C, 15N/14N, and 34S/32S. 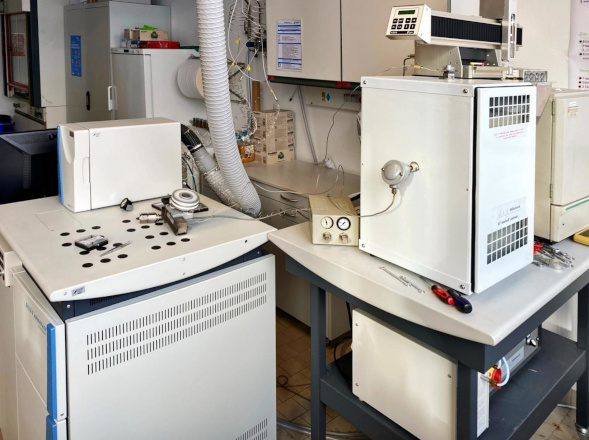 This instrument coupling can facilitate the measurement of hydrogen (H) and oxygen (O) isotope abundance (δ2H, δ18O) and concentrations of organic and inorganic solids and liquid samples.

Homogenized solid samples weighed into sealed silver caps, or liquid samples are introduced into the pyrolysis furnace via with a corresponding autosampler. At temperatures above 1400°C and in absence of oxygen, the sample material is thermally converted to H2 and carbon monoxide (CO), respectively. The gases are purified by means of a chemical trap and then separated by gas chromatography using helium (He) as the carrier gas. The sample’s isotope ratio of 2/1H and 18/16O is then determined via IRMS in comparison to H2 or CO standard gas with known isotope abundance which can be introduced inflow via an open split interface. 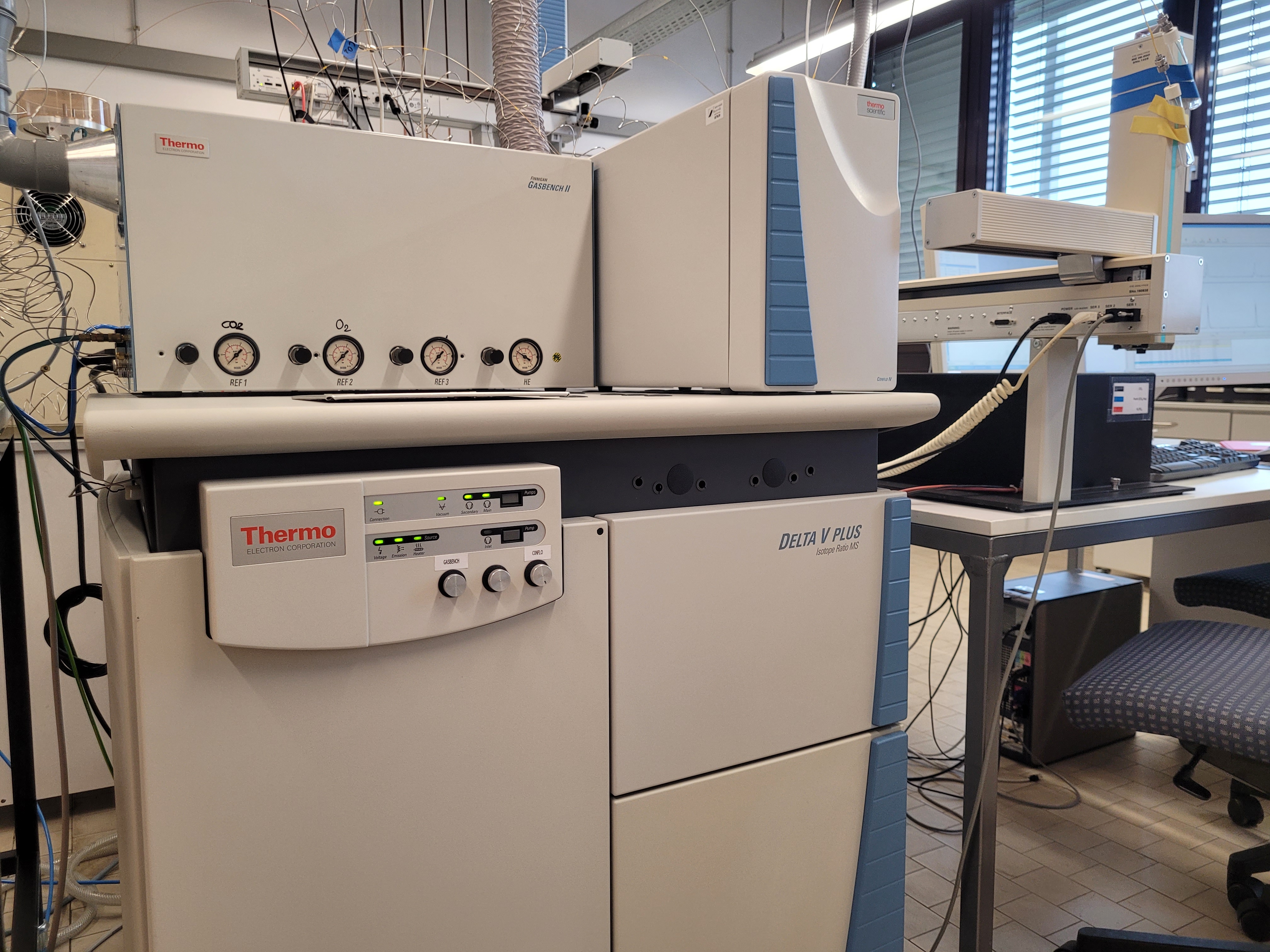 The GasBench from Thermo ScientificTM represents a robust gas preparation and flow-injection system for precise determination of online isotopes and molecular gas ratios via headspace sampling. Applications include the highly precise determination of δ2H via catalytic equilibration of fluids, δ13C, δ18O and δ15N of headspace gases (e.g., CO2, O2, N2), and of carbonates from solids or in solution.

The standardized sample container (“exetainer”) is sampled via a 2-hole-needle. The continuous flow of helium (He) transports the headspace sample along one of two semi-permeable membranes to remove water vapor before a defined volume is “rinsed”. This sample loop is subsequently brought into a second He-flow, which passes the second semi-permeable membrane to remove remaining water molecules before the sample is introduced to a gas-chromatographic column where the trace gases are baseline separated. The flow is then passed into the IRMS via an open split interface. Due to repeated switching of the gas flow, the isotope ratio can be determined from several peak integrations which are compared to standard gases with known isotopic ratio within each run and to international and in-house standards within each sequence. 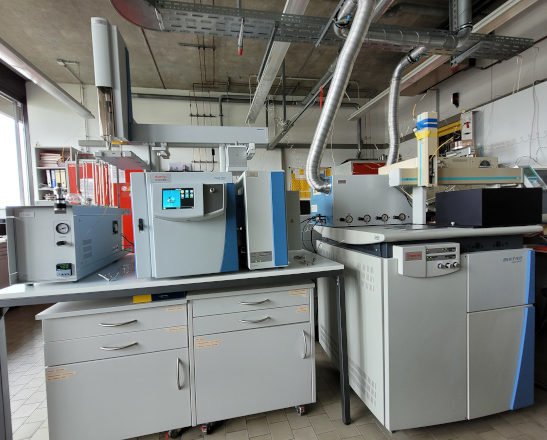 Air samples are collected in glass vessels of 100-ml volume or, if the concentration is sufficient (> 3 ppm N2O), in a standardized sample container (“exetainer”). The samples are passed over a chemical trap for water vapor and CO2 removal from the helium stream. Trace gases are concentrated in cold traps and, after gas chromatographic separation, cryo-focused via a second cold trap. CH4 is oxidized to CO2 in an inline oxidation furnace. CO2 or N2O standard gas with known isotope abundance is added to the carrier gas in the open split interface. Subsequently, isotope ratio mass spectrometry determines the relative isotopic abundances of 13/12C-CO2 or 15/14N and 18/16O of N2O. Our setup allows the analysis of N2O isotopomers (δ15Nα & δ15Nβ) through simultaneous measurement of the positively charged N2O+ and NO+ fragments. 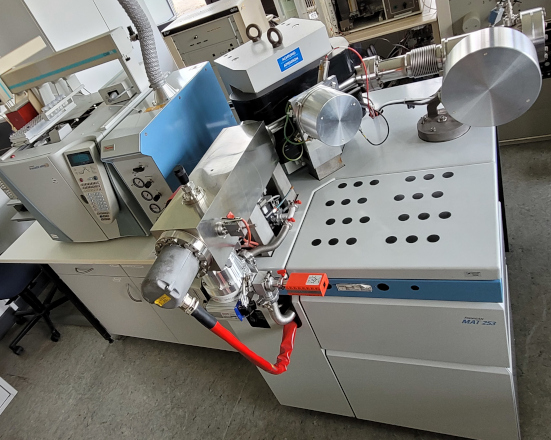 The respective compounds which can be measured include a wide range of volatile and non-volatile organic compounds that must be derivatized prior to analysis and include pheromones, flavors, colors, hydrocarbons, phospholipid fatty acids (PLFA), and amino acids (AA). Generally, the materials must be isolated from their bulk sample matrices, such as soils, sediments, or biological tissues, using multi-step preparative procedures as solid-phase extractions (SPE). After GC-separation, the gases are either combusted to H2, CO2, and N2; allowing δ2H, δ13C, and δ15N analysis, or thermally converted to CO and H2, allowing parallel measurement of δ13C and δ18O after the introduction of the resulting gases into the isotope-ratio mass spectrometer via an open split interface. 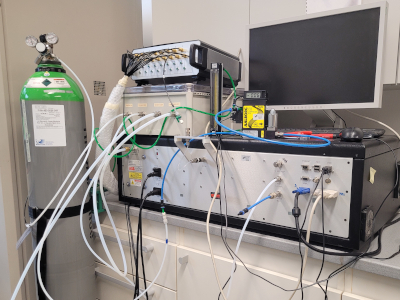 After removal of water vapor, the natural ambient gas mixture containing CO2 is continuously pumped through a cavity of known dimensions. A infrared laser light is introduced into the cavity and passed through the cavity several thousands of times using highly reflective mirrors, thereby creating the several km long effective laser pathlength necessary for accurate determination of the isotopic composition of the CO2. Standard gases with known isotopic signature and concentration are interspaced between the sample measurements to control the instrument's drift with time. The main applications at the BayCenSI include the continous measurement of soil respiration in incubation and field experiments using 13C tracers.

Instrument available at the Dep. of Agroecology (Prof. Pausch)

A laser ablation system is coupled to a combustion unit and an IRMS detector. This allows the measurement of δ13C in high spatial resolution and can be used for natural abundance and labeled solid and dry samples such as soil, sediment, and biological tissues (plants, microbes, and more). The lowest spatial resolution is about 20 µm.

You should provide a solid sample that was dried, stabilized, cut, and polished. We have two cell chambers, one with a 2 cm diameter, the other with a 0.5 cm diameter – the smaller the chamber, the better the resolution (reduction of background signal). Reference material, e.g. a homogeneous acryl body, will be added by us to the sample. Please contact us before sample preparation to ensure proper preparation and fitting of the sample.

Instrument available at the Dep. of Soil Ecology (Prof. Lehndorff)